I have been a fan of Frank Barnard’s work for years, first becoming aware of his writing back in 2006 with the novel Blue Man Falling, based around a Hawker Hurricane squadron in the Battle of France. Frank has a fascinating background, including a career as a journalist, national service in the RAF and even a spell as a racing driver! In fact, as far as I have been able to determine, Frank is the only pubished novelist to have taken part in the prestigious Formula Ford Festival, which at one time was considered the Junior World Championship.

There are relatively few modern novels of WW2 aviation and, surprisingly, no popular long series’ of novels following the same characters in the way that the Hornblower and Bolitho novels do for the Napoleonic Royal Navy, or various mediaeval military series’ such as Bernard Cornwell’s for that era. Barnard’s trilogy, made up of the aforementioned Blue Man Falling, the Band of Eagles (Siege of Malta), and To Play The Fox (Western Desert campaign) published by Headline, is probably the closest thing that exists to that style. (Unless you count Derek Robinson’s books, which are slightly less about the adventure and action and slightly more in the anti-war vein, plumbing the depths of human nature in extremis). In 2012 Frank wrote another standalone war novel, A Time For Heroes, which is a family saga spanning the first half of the 20th century (which I haven’t managed to get to yet, but am keen to read as soon as my to-read list allows). 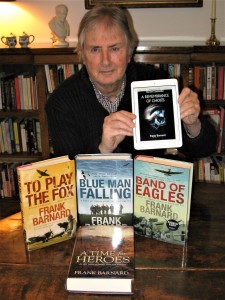 As a fan I was excited to learn that Frank had written another novel, which he had decided to publish via Amazon Kindle this year. A Remembrance of Ghosts is a departure for him in several respects. Most obviously, it’s not a war novel and is not centred around aviation (although that is by no means absent). This novel is a coming-of-age story, a kind of elegy for times that are lost but not forgotten, and a portrait of a country struggling to emerge from the long shadow of the Second World War.

As Frank’s WW2 novels drew on his experiences in the RAF, his latest draws on his early days as a junior reporter for the Kent Messenger newspaper, which unlike many historic local papers is still going strong. In fact, this may be Barnard’s most autobiographical novel yet. The main character is himself an aspiring novelist, at the same time as the author was working on his first book. (The novel ‘One Day’ was written between 1957-1959. According to Frank, “It amounted to 104,000 words and though praised as ‘highly promising’ by legendary agent Osyth Leeston of A.M. Heath it remained unpublished”. He resolved to return to fiction at some future time but nearly fifty years passed before ‘Blue Man Falling’ was published.

In 1958, Tom Doyle is a ‘cub’ reporter on a Kent local newspaper, in a branch office in a small, rather sleepy town. He is imminently due for call-up for National Service and as a result, his life feels on hold. He is keen to try and make his mark in the world of journalism before he’s called up, and it is this that leads him to an ancient church in a small village nearby. Local legend, stretching back centuries, has it that a terrible creature known as The Looker, prowls the countryside on Halloween, harvesting the souls of the unwary. While investigating this story for a feature, Tom runs into war-widow Catherine FitzNeville, and as a result develops a relationship with the once-powerful Tallaton family, including its patriarch Group Captain Tallaton, wild scion Alice, and brusque retainer Paget. He finds the family, with its air of faded grandeur, and trappings and sensibilities of a lost pre-war ‘golden age’, in stark contrast to the drab world of postwar austerity he inhabits, his petit bourgeois family and cynical colleagues. Tom soon develops an obsession with the family, and Alice in particular, which threatens to draw him into a dark and menacing world that lies beneath the idyllic exterior.

A Remembrance of Ghosts is an extraordinarily rich novel, tragic and sometimes blackly comic. The ghosts of the title take many different forms – the memory of Catherine’s husband, missing since 1940; the worlds and hopes destroyed by the war; the people who found there was no place for them in a transitional world with old certainties gone but new freedoms not yet arrived. And of course, the spectre of The Looker, hanging over everything. The threats Tom starts to receive are very real. But what is the reality behind them?

Tom, who starts out extremely wet behind the ears but affecting world-weariness and cynicism, is at an engaging if sometimes frustrating hero. (Or possibly anti-hero). He has much to learn about human nature, as he negotiates a world that feels on the brink of change but is still held back by its many ghosts. The generation slightly ahead of him all experienced the war directly and Tom feels excluded by this, relieved not to have had to experience combat but frustrated at not having been tested in the way his older colleagues – one on tanks, another on convoys, yet another from Bomber Command – have been. 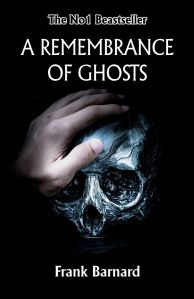 A Remembrance of Ghosts is available here