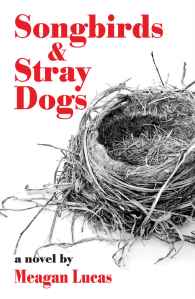 I was familiar with Meagan through her roles as fiction editor of the excellent Barren Magazine so it was with some anticipation that I received her first novel. My interest was piqued even further by the quotation from which the title is drawn (from Beach Music by Pat Conroy), which is illuminating and throws a light on the story that I was not expecting.

Right from the outset, the lush, evocative prose drew me right into the world of the novel. I’ve never been to the US, let alone to North Carolina, where the book is set, but that didn’t matter at all, and as I read I became immersed in the setting, although to call it a setting does not do justice to the rich, real and fully populated world Meagan has conjured up. (I looked up some pictures of Hendersonville after I finished the book and was not surprised to find it looked just as I had pictured). The towns and countryside of Appalachia are perfectly conjured and the sense of place permeates everything – not just the landscape, but the speech, the food – wow, the food! – the music.

The one book I had read recently that Songbirds put me most in mind of was, strangely enough, The Five, by Hallie Rubenhold. This was because the precariousness of life in 1980s North Carolina, as portrayed in Songbirds and Stray Dogs, seems only a little less extreme than that of 1870s London. One mistake, bad decision, accident or simply a turn of fate can throw someone from a safe and happy life into misery. Once down, it might never be possible to get back up again – and even if you can, the life you fell into might not let you stay up. For 21-year-old Jolene, abandoned by her mother as a child, what causes her to fall is an unexpected pregnancy. She is then exposed to the full range of human responses to hardship, from the worst to the best. For Chuck Hannon it’s the local crime boss, and his hold over Chuck’s drug-addicted sister, which drags him back to a world he’d fought to escape from. Chance brings the two together as they struggle with the raw deal life dealt them.

Songbirds and Stray Dogs is beautiful, rich, heartwarming and heartbreaking – often at the same time. It’s gorgeously written and I highly recommend it.