Air and Sea Stories is pleased to welcome Jemahl Evans, author of the critically acclaimed The Last Roundhead (Caerus Press, 2015) and the forthcoming sequel This Deceitful Light, which is due for publication in September. Jemahl graduated with an MA in History, focussing on poetry and propaganda during the Wars of the Roses, and started writing The Last Roundhead in 2013. Jemahl has just been made a full member of the Historical Writers Association.

The Last Roundhead is a rattling good read, combining historical settings of striking authenticity with a compelling story and one of the most singular characters to emerge from historical fiction in the last twenty years, the rakish but vulnerable Blandford Candy. The second book is, from the early draft I’ve seen, even better. I’m delighted to chat with Jemhal about history, creating fictional historical worlds and the process of writing. 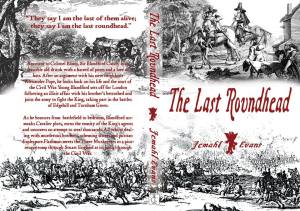 Welcome Jemahl. Can you tell us when the character of Blandford Candy first appeared to you? Did you decide from the beginning he was an ancestor of Clive Candy, or did the idea of a charming but cynical Civil War parvenu come first?

“On a wet Friday afternoon around 2009. I was teaching a rather wonderful group of Year 8 kids who managed to get me monologuing about the Restoration and long term impact of the Civil War rather than doing work. The Last Roundhead was my first book, and I didn’t really know how to go about it, but I started reading and gathering sources together. Then it took a couple of years, slowly learning how to write. I joined the Harper Collins Authonomy site and got great feedback and tips on how to improve, and it all grew from there.”
You’re a historian by training, but I understand the Civil War wasn’t originally the period you specialised in. What was it that appealed to you about the Civil War? And do you think that period has anything to say to us in these somewhat fractious times in British politics and life?

“All my dissertations and research theses were Medieval – although that is twenty years ago – so researching a new period in depth is a joy, but I think research for Historical Fiction is a very different discipline to writing academic history. As an author I can indulge my foibles, play with apocryphal stories, give focus and significance to events that as an historian I would never do. I always emphasise it’s historical fiction not history. It’s almost a parallel world that rhymes with the history rather than an accurate reflection. Ultimately, as an historian my focus is to try and understand why change happens, as a writer of Historical Fiction it’s to entertain.”

How did you go about researching The Last Roundhead and This Deceitful Light? Did you start with the historical events and plot Candy’s course through them, or did you fit events to Candy’s narrative?

“I started with Samuel Luke’s journal and things seemed to just flow from there. Book 1 is very picaresque, but the threads just seemed to fit quite well together so fitting Blandford into the history as an observer seemed quite a natural process. I know authors sometimes say their characters do the unexpected and take on a life of their own, and I definitely think that’s the case with him. That’s been the case with book 2, in particular.”

There are a lot of real historical figures who make an appearance in both books, who appear as fully realised characters with their own internal lives. How much of this was based on the historical record and how much did you fill in with imagination?

“Oh Gosh, well it’s all my own interpretation. I think John Hampden in Book 1 was someone I really wanted to do justice to, and whilst I’ve used some of his recorded words there’s a lot of invention/interpretation in there as well. Cromwell is an important character in This Deceitful Light (coming September, folks!) but actually I found him easier than Hampden. There’s a lot more written about him, and his own letters and actions are pretty well recorded. There is a scene in Ely Cathedral that is recorded almost word for word in the sources.”

The voice in both books feels very authentic, with a bawdiness and earthiness that is nevertheless the antithesis of the puritans who were increasingly dominant. To what extent did the voice emerge itself and to what extent was it influenced by the writings of the day?

“Blandford’s voice is pretty much my grandfather (old Blandford that is) with his stories I was told as a kid. He had a very dark earthy humour, something a lot of men working in the pits had, and a passion for story telling. My grandfather was also, paradoxically, a very strict Calvinist Methodist, which gave me a real insight into the 17th Century Religious mindset. It wasn’t that much of a leap from the non-conformism of Wales in my childhood to the mindset of the iconoclasts of the Civil War.”

It sounds as though the writing and editing of This Deceitful Light has been challenging. How have you found the particular difficulties of following up a successful first novel? Have you found it a case of the ‘difficult second novel’ as many writers face or is it something more specific?

“Getting the first draft finished was hell, I must say. So, yeah it was difficult. I think it’s all still a very steep learning curve, and I spent maybe six years from first getting the idea and starting to get sources together, to finishing The Last Roundhead and seeing it get published. I had to try and condense that down, and honestly I’m still learning and developing as a fiction writer, so it’s taking the lessons you learn and building on them. I think This Deceitful Light is better for the process, and I am really chuffed with how it has turned out (helped in no small part by my editor at Holland House who does push for more and better work).”

What, in your opinion, is the best thing about writing historical fiction?

“I love the solitary side of research and writing and totally immersing yourself in a period, and the end product when it goes out – particularly when people like it – but yeah the research side is a joy.”
—
You can find Jemahl on Twitter at @Temulkar
His books are on Amazon – click here for Jemahl’s author page